When we started the One by One program, our plan was to provide permanent funding for the program. Because of the large number of soccer players, it takes over $15,000 to run the program each year.  Initially, we discussed with Pastors William and Anais Padilla the idea of raising enough money to buy a soccer field.  The plan was for the soccer field to be rented to other teams, and perhaps to build some buildings that could be used for a church retreat.  Over the past two years, we looked at various pieces of land in the San Jose area that were for sale. In order to make the soccer field accessible to all the players, it needed to be located in the central part of the city.  The land that was available was very expensive (over $1 million) and some of the land needed extensive work.  Although we have been able to raise over $200,000, buying a soccer field was simply out of our reach. 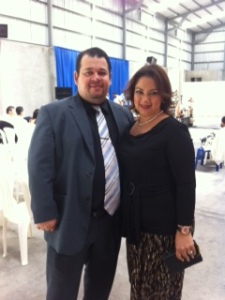 We prayed about the situation with Pastors William and Anais Padilla, and consulted with Dr. Steve and Rebecca Scott.  Dr. Scott and his wife have been major supporters of our program. After much thought and prayer, we decided to change course.  We began looking for buildings that would be suitable for a permanent home for the Vuelo de Aguila church.   The church has been renting different locations for its services and programs for the last several years. During our last trip to Costa Rica, we found a building that was ideal for the church. This piece of land cost $525,000. On June 27, 2014, we coupled the donations we raised over the last several years with a generous loan from Dr. Steve and Rebecca Scott and were able to purchase this building. The church will use its donations to pay the remaining balance of the loan, and will also use donations to fund the One by One soccer program on a permanent basis. In addition, we will continue to raise funds to help pay off the balance of the loan. Because the church will eventually have a building that will be debt-free, some of its donations can be used for the One by One program, as well as other church programs.

We definitely feel that God has guided us through this project, but not always in ways that we anticipated. We believe that the purchase of the building is the best way to not only support the Vuelo de Aguila church, but to ensure that the One by One  program is a force for permanent and positive change in the lives of teens in Costa Rica.

The church and its members are the people who make the program work, and who provide the weekly guidance and leadership for the players. The church has also hired professional soccer trainers to work with the teens, and to provide an environment for growth, opportunity, and change.  The One by One program is designed to provide an opportunity to teens in Costa Rica who, through their own hard work and effort, use it to better themselves in their community and to learn about Jesus.

We are excited about the future of One by One  and the Vuelo de Aguila church. We are also deeply appreciative of the guidance and leadership of Pastors William and Anais Padilla, as well as the incredible generosity of Dr. Steve and Rebecca Scott.
One by One Costa Rica One by One Costa Rica

While on our most recent trip to Costa Rica, we were able to see several of the One By One soccer games. The crowds were cheering and the grass was as thick as carpet. All around us people were laughing and playing; everyone, including us, was having a great time. By the time the games started, some of the people had come up with cheers for the game. It was so fun to hear people go 'ooh' when the One by One team crossed over the opposing team, or hear them yell 'defense' when we were under attack.

With some my friends, Cami, Isaac, and Daniella, I spent the time watching the soccer match, playing soccer with new friends, talking to people, drinking soda and playing games under the trees. Needless to say, it was fantastic. The vibe of the whole place was as bright as the sun beaming down that day. We spent most of the day at the field, and at some point people gathered and had a huge arm wrestling match. One of the boys challenged me, and I accepted the offer. Though I won't say who won, I will say I was so happy and could not stop smiling by the end.

Sometime after that, all of the players and people enjoyed a feast prepared by the Vuelo de Aguila church.  Several tables were covered by beans and rice, chips and chicken. It smelled quite flavorful, making us all even more hungry. Players first, we all scrambled in line for the food. After we ate, everyone played around until the sun set and the sky turned orange with blue. Overall, it was a fantastic day with fantastic soccer. Laughs were shared, friends were made, and in the end it became one of my favorite memories made.
One by One Costa Rica One by One Costa Rica